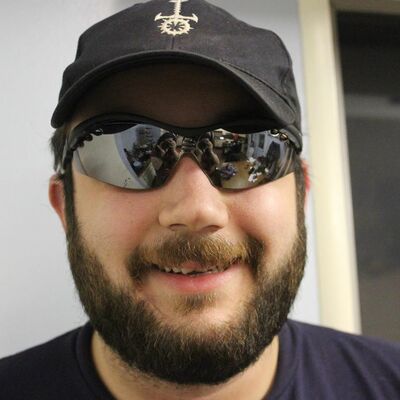 In a world where you can be anything, be weird as heck

my sister: why do you delete so many posts

me: sometimes you don't know something's really stupid until you send it out into the world

my mother: *staring at me just a beat too long*

Infosec tip: if your CISO, chief privacy officer, and chief compliance officer all resign in unison, then you are told you are responsible for risk and compliance personally ... resign immediately.

I love how the EU doesn't recognise e-sport as sports because the games are privately owned and controlled by corporations. Like, I'm not joking, that's such a great stance!

A corporation running a game can ruin someone's career by making a balance change to the game. They can somewhat fix matches that way by pushing an update just before a tournament.

For videogames to qualify as an actually sports, they'd have to be standards-based rather than implementation-based. Ergo, I can play chess on any kind of board with any pieces so long as they meet the criteria for the rules of the game. But videogames aren't built like that. They're implementation-based and owned by private corporations which makes them really unfit as sports.

The Press should be the biggest cheerleaders of the Fediverse because the Press, itself, works best in a decentralized environment.

Journalism works best when everyone is accountable to each other.

How is there accountability when one corporation decides what gets to be seen?

mastodon is a consensual hallucination that converts json to shitposts and that’s really all you need to know about it.

Eli Lilly losing billions after a rumor of free insulin.

Lockheed Martin losing billions after a rumor of no more weapons exports to crisis regions.

"$company losing billions if $goodThing were to happen" is really all you need to know about free market capitalism.

Capitalism is a system of violence.

Seeing Mastodon and the fediverse succeed today is deeply gratifying and hopeful for me. It's imperfect and early, but watching thousands of people birth communities that they can nurture and shape and watch grow and evolve, after so many years hoping and dreaming of this ...

"I think the jargon could definitely use some work, to make it more inviting for people who don’t see themselves as tech nerds. But as to the basic structural complexity, what I ask you to consider is this: What if it's actually a good thing that Mastodon is a little complicated and you need to spend a bit of time learning before you jump in?"
https://www.nowwearealltom.com/what-is-mastodon/

In the next year, the Fediverse is going to become a business. Specifically, in four areas:

Many people won't be happy about this metamorphosis, but for the long-term survival of the Fediverse, it must happen.

These articles about Twitter malfunctioning as a business from @mmasnick are coming fairly quickly. The US Federal Trade Commission made Twitter sign some agreements that maybe they aren’t complying with, and the penalties can be harsh.

CWs, image descriptions, and the slow web won't hurt you.

You're better than a set of Pavlovian responses.

A different way is possible.

People have noted that it seems like Elon Musk spent 44 Billion dollars just to destroy Twitter. And that's correct. God Emperor Musk realized that millions of people were trapped in the walled gardens of Twitter. With despotic oppression, he is leading Twitter users out of their complacent centralization, scattering them into Mastodon and the Fediverse. We have all underestimated Musk's plan, to teach us a lesson we will remember in our bones. #twitterexodus

If you had the bad fortune of being imprisoned by the Doge, there is an "enhanced interrogation" room near the functionary archive. At night you would be brought here, have your hands tied behind your back, and hung by your arms. The window would let moonlight illuminate your face, while your interrogators sat in the dark, heard but not seen.

If you can manage narrow staircases, I strongly recommend the Secret Itinerary tour at Doge Palace in Venice

Fedified.com is a list of Twitter-verified accounts that have moved to Mastodon.

This is a hand-curated list, so it's updated a few times daily. @DataDrivenMD https://fedified.com/

You can find people like @mollyjongfast @taylorlorenz and me. ☑️
#fedified #twittermigration

Just because this election went well doesn't mean the fight for democracy is looking towards victory. Every election involving an authoritarian party is dangerous. Stay focused, stay motivated.

Security and privacy checklist for Mastodon via @gcluley:
✅ Set up a strong password
✅ Set up 2-factor-authentication (I use Authy for this, but there are other apps)
✅ Direct Messages: Can be read by your admin. Don't use Mastodon for private conversations. Use Signal for that.
✅ People you mention in DMs can read a copy of the messages
✅ You can verify yourself using the options at Edit Profile > Appearance on Mastodon

As twitter people flood Mastodon, I think it would be helpful if there was a list of the main instances incurring growing pains that need donations. Mastodon and mastodon.social / mstdn.social *should* have plenty of donations, but there are others that need help. If there is one or a list I'd love to get it.

@zkat “Not something that's provided to us for our consumption, but a commons that we're all responsible for maintaining and improving“ is the exact phrase I didn’t know I needed. Thank you

Leftist Network is an instance of Mastodon, the social network of the future: No ads, no corporate surveillance, ethical design, and decentralization! This Mastodon instance is designed for those with Leftist politics to share posts with each other. We strongly recommend using secure and decentralized communications for your private discussions, and we have recommendations!